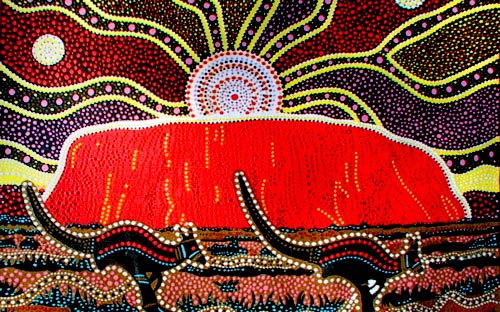 I am such an advocate for indigenous cultures all over the world.  Seeing as I live in Australia though, the Aboriginal people of this country have a special place in my heart.  NAIDOC Week celebrates the history, culture and achievements of Aboriginal and Torres Strait Islander people.

As much as the integration of indigenous culture into Australian society needs to be much more prevalent and celebrated than it has been in the past, there is no time like the present.

I was listening to Triple J this morning (a national radio station) and they had a NAIDOC Week takeover by some local indigenous musicians.  The amount of awesome music played during the show was so rad!  Here are some of my absolute favourite songs/covers featuring awesome Aboriginal artists.

Yothu Yindi – Treaty
An absolute anthem.  This song will never get old.

A.B. Original – 2 Black 2 Strong
How good is it when our first Australian’s are making a name for themselves in our own genre of music; Aussie Hip-Hop. Also Briggs if you’re reading this, I think we should start a local version of Action Bronson’s ‘Fuck That’s Delicious’. It would be epic.

Lonely Boys – Murray Island
One to get you dancing in your seat.  If this is only their first single we are in for a real treat. A great sound and musical talent.

Wilcannia Mob – Down River
A song of the youth. Unfortunately no video but a classic sound none the less.

Exe 5 – Sunset Feeling
Heard this one for the first time this morning. A short and sweet summer track.

Warumpi Band – Black Fella / White Fella
1987! A true rock song with a message that is more relevant than ever.

Saltwater Band – Compass
Try not to think of a tropical holiday while listening to this one. What an amazing native language. What a shame we are not doing more to preserve and share it.

My Island Home – Christine Anu
Australia’s unofficial National Anthem. Make sure you check out the original by the Warumpi Band too, an absolute classic.

Dan Sultan & Ella Hooper – With A Little Help From My Friends
One of the most amazing covers you will ever listen to. Press replay.

Briggs & Gurrumul – The Children Came Back
An awesome Like A Version. Gurrumul is a spiritual gift from the music gods.

The Last Kinection – Rhythm is a Dancer
What a BANGER. Turn it up. Get up!

A Life With Purpose is an online space that explores the search for one's ikigai, or reason for being. It will charter new waters as it strives to bring us closer as a community and wider society. Please join us.